Charlie Shuman, the President of Charlie’s Motor Mall is running what is now considered the largest new car dealer group in the state. He takes pride in superior customer satisfaction with the largest inventory of new, used cars and certified pre-owned vehicles available.

Charlie hasn’t forgotten his small beginnings when he took his first job as an office clerk at the former Henley-Kimball Co, a Dodge dealership. Where he worked his way through other positions, before moving on to work for American Motors Jeep Corp. During those 17 years, he worked his way up, eventually becoming District Sales Manager for Maine, Massachusetts and New Hampshire.

In 1986, he and a partner opened Charlie’s Subaru in Augusta, Maine. Charlie bought out his partner after 5 years and continued buying more dealerships… and his success has continued. 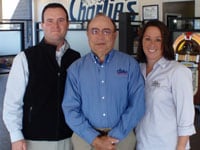 Charlie Shuman has built the company from a single franchise employing 17 people in 1986 to a 240- employee, 8- franchise company selling nearly 7,000 vehicles annually. Even though Charlie’s has grown substantially, we still are a family run business with the same values and beliefs that starts the organization 25 years ago.

The company offers state of the art service, parts and body shop facilities with over 60 factory-trained technicians. So if are looking for a dealer that offers great prices, a large inventory and attention to every customer, then you’ve come to the right place.

Even though Charlie, Steve and Elissa don’t personally meet every customer, the commitment to exceptional customer service can be seen in all our employees. They all stand behind Charlie and you!

You can read more about Charlie’s and the history of Charlie’s Motor Mall by the Kennebec Journal in this special celebrating Charlie’s 25th Anniversary.